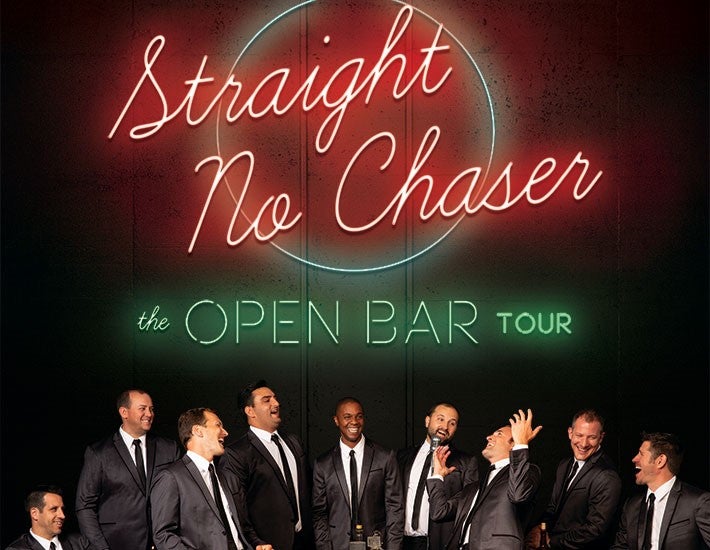 Tickets for the Friday, November 15th concert at Barbara B. Mann Performing Arts Hall at FSW will go on sale Friday, May 10th at 10AM at the Box Office, online at www.bbmannpah.com or call (239) 481-4849.

Straight No Chaser’s latest studio album, “ONE SHOT“ is available now at all streaming services HERE as well as via the official Straight No Chaser store HERE. The album sees SNC doing what they do best with distinctive takes on classic pop and soul favorites, including Ricky Martin’s “Livin La Vida Loca,” Fleetwood Mac’s “Go Your Own Way,” James Brown’s “Papa’s Got a Brand New Bag,” and the LP’s first single, an energetic mash-up of Boyz II Men and Montell Jordan entitled “Motownphilly/This Is How We Do It.” The track is joined by an official lyric video, streaming now at the official SNC YouTube channel HERE.

“ONE SHOT” is further highlighted by a richly harmonized version of Simon & Garfunkel’s “Homeward Bound” in which the hard-touring group expresses their deep yearning for the comforts of family life. In addition, the LP features alongside seven entertaining conversational interludes wherein the nine members of Straight No Chaser trace their unlikely rise from an undergraduate singing group at Indiana University to a beloved Atlantic Records act with a devoted international fanbase.

Though filmed at Indiana University in December 1998, Straight No Chaser’s version of “The 12 Days of Christmas” – interpolating Toto’s “Africa” – proved the hottest viral video of the 2007 holiday season, receiving more than 7 million views that December alone and now boasting close to 23 million views HERE. Among those millions of viewers was Atlantic Records Chairman/CEO Craig Kallman, who promptly signed the Indiana-based a cappella group to the label’s legendary roster. Taking off from the runaway success of “The 12 Days Of Christmas,” Straight No Chaser made their now classic debut with 2008’s “HOLIDAY SPIRITS,” followed in the next year by “CHRISTMAS CHEERS.” Both albums reached the top of the holiday charts at Amazon and the iTunes Store and are now certified gold by the RIAA. The extraordinary decade that followed has seen the group amass album sales in excess of 1.6 million in the U.S. alone, along with more than 100 million YouTube views thus far.

CONNECT WITH STRAIGHT NO CHASER: