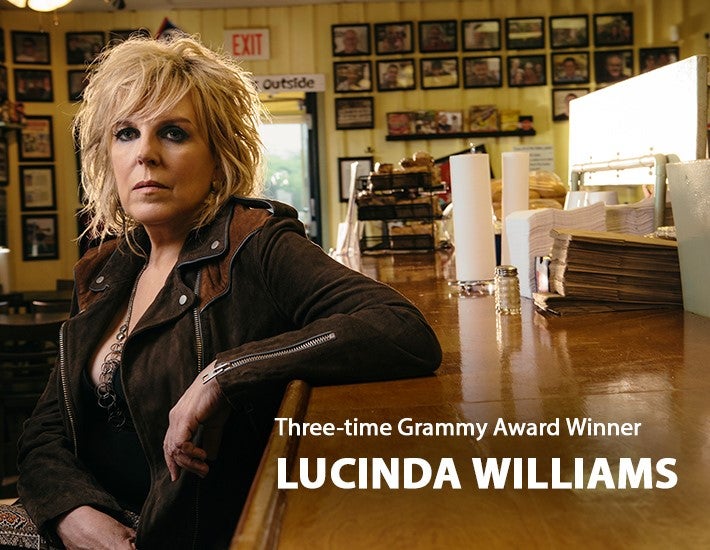 Three-time Grammy Award Winner, LUCINDA WILLIAMS, to perform at Barbara B. Mann Performing Arts Hall at FSW on Tuesday, February 4th at 7:30PM. Tickets go on sale Friday, October 11th at 10AM at the Box Office, online at www.bbmannpah.com or charge by phone at (239) 481-4849.

Lucinda Williams has been carving her own path for more than three decades now. Born in Lake Charles, Louisiana, Williams had been imbued with a “culturally rich, economically poor” worldview. Several years of playing the hardscrabble clubs gave her a solid enough footing to record a self-titled album that would become a touchstone for the embryonic Americana movement – helping launch a thousand musical ships along the way.

While not a huge commercial success at the time Lucinda Williams (aka, the Rough Trade album) retained a cult reputation, and finally got the reception it deserved upon its reissue in 2014. Jim Farber of New York’s Daily News hailed the reissue by saying “Listening again proves it to be that rarest of beasts: a perfect work. There’s not a chord, lyric, beat or inflection that doesn’t pull at the heart or make it soar.”

For much of the next decade, Williams moved around the country, stopping in Austin, Los Angeles, Nashville, and turning out work that won immense respect within the industry (winning a Grammy for Mary Chapin Carpenter’s version of “Passionate Kisses”) and a gradually growing cult audience. While her recorded output was sparse for a time, the work that emerged was invariably hailed for its indelible impressionism -- like 1998’s Car Wheels on a Gravel Road, which notched her first Grammy as a performer.

The past decade brought further development, both musically and personally, evidenced on albums like West (2007), which All Music Guide called “flawless…destined to become a classic”, and Blessed (2011), which the Los Angeles Times dubbed “a dynamic, human, album, one that’s easy to fall in love with.” Those albums retained much of Williams’ trademark melancholy and southern Gothic starkness, but also exuded more rays of light and hope. This all lead to the 2014 release of Williams’ first double studio album Down Where The Spirit Meets The Bone, followed by the 2016 release of her second double album, the The Ghosts of Highway 20. Both albums received overwhelming praise from the media and fans, thus proving that Williams’ songwriting is as strong and important as it has ever been. In a rare instance of an artist taking a full-length reconsideration of an earlier work, Williams released This Sweet Old World – a complete re-recording of her 1992 album Sweet Old World in September 2017.