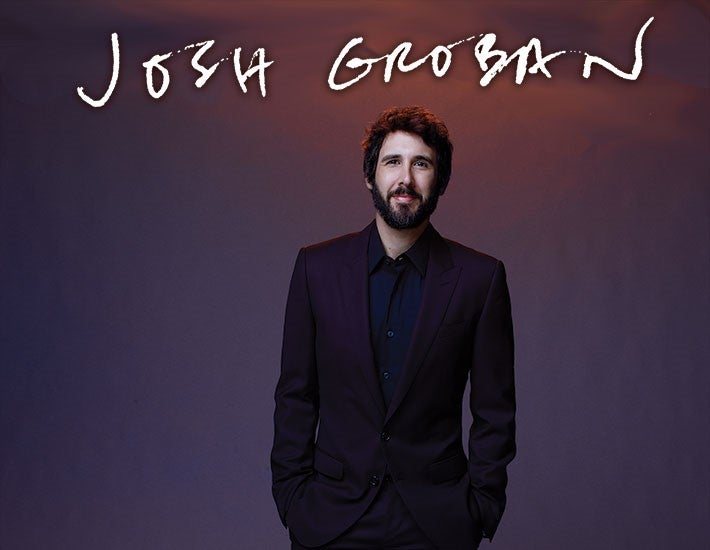 Global superstar Josh Groban announces a handful of special shows in Florida early 2020 kicking off on March 8th in Fort Myers at the Barbara B Mann Performing Arts Hall at FSW before wrapping up on March 16th at the Ruth Eckerd Hall in Clearwater.  Groban was unable to schedule stops in Florida on his last sold-out Bridges tour, so he wanted to make it up to his fans by booking several intimate shows in early 2020.

Pre-sale for tickets and VIP begins today, Oct. 21st 10am ET and general onsale begins this Friday, Oct. 25th at 10am ET. Please see below or visit JoshGroban.com for a full list of dates and on-sale information.

Tickets for the March 8th Fort Myers concert will be available at the BBMann Box Office, online www.bbmannpah.com or charge by phone at (239) 481-4849.

Groban has once again partnered with CID Entertainment to offer VIP ticket packages for select shows, which bundle a premium concert ticket with exclusive merchandise and pre-show access to a lounge for food and drink amongst fellow fans. A limited number of packages also include a Meet & Greet with Josh. For details, visit www.cidentertainment.com/events/josh-groban-tour/.

Last week, the Madison Square Garden Company (MSG) announced Groban’s one-of-a-kind residency at New York’s iconic Radio City Music Hall that will begin in 2020. The series will kick off on Valentine’s Day, February 14, 2020, continue on April 18, 2020 with a third date added for June 20, 2020, due to overwhelming demand.

Josh Groban’s Great Big Radio City Show will draw on the Grammy, Emmy and Tony Award-nominated performer’s multifaceted career and feature special segments; guest stars and performers; and a concert performance featuring Groban. No two shows will be the same, making each evening a unique, once-in-a-lifetime experience for fans.

Possessing one of the most outstanding and instantly recognizable voices in music, GRAMMY Award-nominated singer, songwriter, and actor Josh Groban has entertained fans across the globe with his multi-platinum albums and DVDs (over 35 million sold worldwide), electrifying live performances, and comedic film and television appearances. The 37-year-old Los Angeles native stands out as “the only artist who has had two albums appear on the Top 20 Best-Selling Albums list of the past decade,” according to Billboard. He has appeared feature films such as Crazy, Stupid, Love, The Hollars, Coffee Town, and Muppets Most Wanted, as well as on NBC’s The Office, FX’s It’s Always Sunny in Philadelphia, and CBS’ The Crazy Ones. His discography encompasses eight studio albums, including his 2001 self-titled 5x-platinum debut, 2003’s 6x-platinum Closer, 2006’s double-platinum Awake, 2007’s 6x platinum Grammy-nominated Noel, 2010’s gold-certified Illuminations, 2013’s gold-certified All That Echoes, 2015’s worldwide million selling Stages, and most recently 2018’s Bridges. In 2017, he concluded his Broadway run in Natasha, Pierre & The Great Comet of 1812, which Time Out New York called, “one of the best musicals of the decade”. He also released his first coffee table book, Stage to Stage: My Journey to Broadway, chronicling the past two years of his life on Broadway.

2018 marked yet another watershed year for Groban extending his influence across music, film, television, and Broadway yet again. He co-hosted the Tony Awards to widespread enthusiasm worldwide after garnering his first nomination in 2017. He starred in the NETFLIX series, The Good Cop, that made its debut on the streaming platform September 21. On the same day, he unveiled his eighth full-length studio offering, Bridges [Reprise Records]. In addition to duets with Andrea Bocelli, Sarah McLachlan, and Jennifer Nettles, it boasts nine tracks co-written by the superstar. He launched his North American Bridges headline tour in support of the album during the fall of 2018 and continued into the summer of 2019. He maintains his position as the consummate American showman in 2019 and beyond. Groban remains an active arts education philanthropist and advocate as a member of Americans for the Arts Artists Committee and Groban’s Find Your Light Foundation helps enrich the lives of young people through arts, education, and cultural awareness.