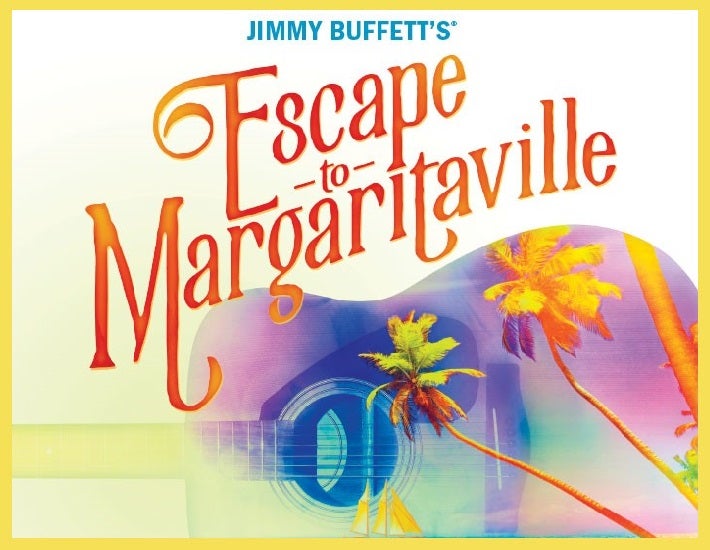 Tickets on Sale Friday, October 4 at 10AM

Plan your escape to the new musical about the choices we make – and the people we become – once we’ve had a change in latitude. Barbara B. Mann Performing Arts Hall at FSW is pleased to announce that Jimmy Buffett’s ESCAPE TO MARGARITAVILLE will come to Fort Myers from Wednesday, April 1st to Sunday, April 5th.  Tickets go on sale Friday, October 4th at 10AM at the Box Office, online at www.bbmannpah.com or charge by phone at (239) 481-4849.

Welcome to Margaritaville, where people come to get away from it all – and stay to find something they never expected. Get ready for a hilarious and heartwarming musical with the most unforgettable songs from one of music’s greatest storytellers. USA Today calls it “A little slice of paradise!” and Entertainment Weekly raves, “It will knock your flip-flops off!” So don’t let the party start without you.

With a book by Emmy Award winner Greg Garcia (“My Name is Earl,” “Raising Hope”) and Emmy Award nominee Mike O’Malley (“Survivor’s Remorse,” “Shameless”), ESCAPE TO MARGARITAVILLE is the musical comedy getaway featuring both original songs and your most-loved Jimmy Buffett classics, including “Fins,” “Volcano,” “Cheeseburger in Paradise” and many more.

Based on the original direction by Tony Award-Winner Christopher Ashley (Come From Away), this production is under the helm of Amy Anders Corcoran (Freaky Friday). Choreography is by Tony Award-Nominee Kelly Devine (Come From Away), with associate choreography by Andrew Turteltaub (Escape to Margaritaville); scenic design by Walt Spangler (Tuck Everlasting); costume design by Paul Tazewell (Hamilton); lighting design by Howell Binkley (Hamilton) and Amanda Zieve (Titanic); sound design by Brian Ronan (Beautiful) and Craig Cassidy (Cirque Dreams); and wig, hair & makeup design by Leah J. Loukas (On the Town). Orchestrations are by Michael Utley (License to Chill), with dance music arrangements by Gary Adler (Avenue Q). Music supervision & arrangements and additional orchestrations are by Christopher Jahnke (Porgy and Bess), with music direction by Matthew Smedal (Clueless: The Musical). Casting is by Binder Casting/Chad Eric Murnane, CSA.

Set your mind on island time and get those fins up!

JIMMY BUFFETT (Composer/Lyricist). Singer/songwriter/author Jimmy Buffett has become a legend of popular culture as the composer of such classic songs as “Margaritaville,” “Come Monday” and “Cheeseburger in Paradise.” He has recorded over 50 albums, most of which have gone gold, platinum or multi-platinum. His sold-out concert tours are an annual rite of summer passage for his multigenerational legions of fans, some affectionately known as Parrot Heads, many of whom are professionals by day and who dress in spectacular and outrageous tropical outfits and headwear when Jimmy comes to town. Born in the Gulf Coast town of Pascagoula, Mississippi, he was raised in Mobile, Alabama. He is a fourth-generation sailor and fisherman, a pilot, a surfer and a frequent traveler to remote and exotic places of the world, having become addicted to National Geographic magazine as a child. The lyrics to many of his songs are influenced by his travels all over the globe. As a best-selling author, he is one of only nine authors in the history of The New York Times Bestseller List to have reached #1 on both their fiction and non-fiction lists. Jimmy has received two Grammy nominations, numerous Country Music Association awards and was the recipient of one of the nation’s highest songwriting honors when he was inducted into the Nashville Songwriters Hall of Fame. And now Jimmy is heading back into the theatre world. The new musical Escape to Margaritaville features the music and lifestyle of Jimmy Buffett, from an original story, and includes both new songs and the most-loved Buffett classics. Speaking of Buffett classics, the most famous of them all, “Margaritaville” has been inducted into the 2016 Grammy Hall of Fame for its cultural and historic significance. Only those recordings that have influenced and inspired both music creators and fans for generations are considered for this most special honor.

GREG GARCIA (Book) created three back-to-back syndicated comedies: “Yes, Dear,” “My Name is Earl” and “Raising Hope.” He has written on a variety of other sitcoms, including “Family Matters” and “Family Guy,” and won an Emmy for Outstanding Writing for a Comedy Series for the pilot of “My Name is Earl.”  Garcia entered the world of musical theatre for the sole reason of hoping his oldest son Camden, a very talented actor at Boston University, would think he was cool. When he’s not writing, directing and producing TV shows, he likes to watch hockey with his son Nathan, play board games with his son Trace and walk Mabel the dog on the beach with his amazing wife Kim.

MIKE O’MALLEY (Book) is the creator of the award-winning television series “Survivor’s Remorse,” which recently completed its four season run on Starz. Next up, he will be the showrunner for the LionsGate/Starz hourlong drama “Heels” which will begin production in 2020. O’Malley also wrote on Showtime’s “Shameless” for the first four seasons. As an actor, he was nominated for an Emmy for his portrayal of Burt Hummel on “Glee” and recently appeared in YouTube Premium's “Wayne” as well as the upcoming “Snowpiercer” for TNT. Television acting credits include: “Yes, Dear;” “Justified;” “My Own Worst Enemy;” “My Name is Earl;” “Welcome to the Family” and “The Mike O’Malley Show.” Film acting credits include: Sully, Concussion, 28 Days, Deep Impact, Cedar Rapids, Eat Pray Love and Meet Dave. Way back when, he hosted the Nickelodeon shows “Get the Picture” and “Guts.” He is the author of two plays that have been published by Samuel French: Three Years from Thirty and Diverting Devotion. His play Searching for Certainty was adapted into the film Certainty, which won the Best Screenplay award at the Boston film Festival. Born in Boston, and raised in New Hampshire, Mr. O’Malley resides in Los Angeles with his wife Lisa and their three children.