Beatles vs. Stones Tribute Show To

FORT MYERS, FL (1/13/23) – The critically-acclaimed Beatles vs. Stones – A Musical Showdown production will be bringing its highly-anticipated Winter 2023 Tour to the Barbara B. Mann Performing Arts Hall on Friday, March 3 at 7:30 pm. This unforgettable show takes the audience on a musical trip to the heart of the British Invasion, to witness the greatest concert that never was – The Beatles and The Rolling Stones live together on stage. The Fort Myers show is part of a 125-city tour of the U.S., Canada and Mexico.

For the past decade with more than 1400 performances across the country and abroad, this unforgettable production has been delighting audiences with their talent, warmth, humor and passion for the music of The Beatles and the Rolling Stones. A critic for the Los Angeles Times called it “the most unique tribute show in decades.”

Hailed as the most exciting Rolling Stones tribute band, Satisfaction has been receiving delighted acclaim from audiences all over the country for more than two decades. Chris LeGrand and his band bring to the stage the amazing energy and unmistakable enthusiasm that is the hallmark of a live Rolling Stones performance. Whether it's the passion and fury with which they deliver the blues-soaked, groove-driven rock anthems, it’s their attention to detail and nuance that makes the Satisfaction – The International Rolling Stones performance a truly awe-inspiring part of the show.

Utilizing the multi-instrumentalists at their disposal, Abbey Road re-create the songs in all their depth and glory with the studio overdubs that the Beatles themselves never performed live. They also touch on the deeper cuts that were seldom heard in concert. Abbey Road has amassed a strong national touring history and has honed their show to become one of the most musically and visually satisfying Beatle tribute acts in the world.

“If the British Invasion had a house band in the 60s and beyond, hopefully we’d be that band,” said Chris Paul Overall, who plays “Paul McCartney” in the show.

“There’s always a special feeling for these shows— people dress up in 60’s costumes, wear Beatles and Rolling Stones clothing, and enjoy one another’s company during the concerts,” said LeGrand.

The Beatles vs. Stones show has become a phenomenon, widely regarded as the world’s greatest tribute concert. 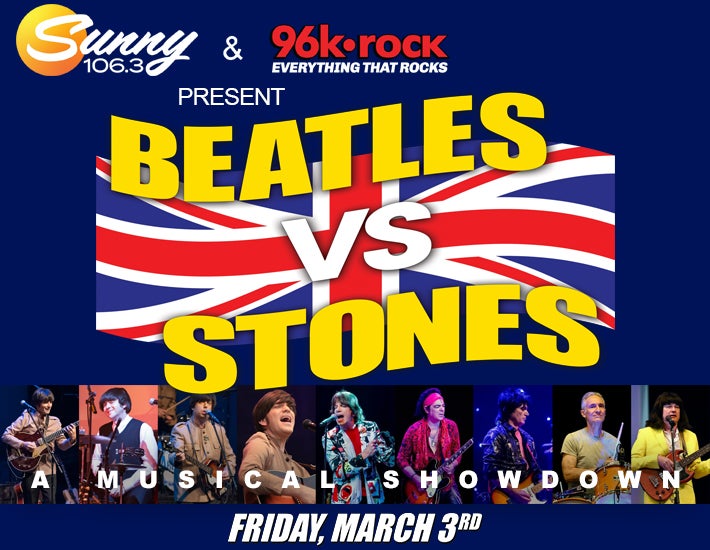